The Philadelphia Eagles’ 2019 season ended with a 9-7 record. They won their final four games to salvage a season decimated by injuries to take the NFC East crown. Quarterback Carson Wentz exited the NFC Wild Card game against the Seattle Seahawks early with a concussion, and it proved to be devastating. The Seahawks won 17-9 as the Birds offense couldn’t get it together without Wentz.

PA online sportsbooks have a packed playbook of betting markets for all 32 NFL teams. Philadelphia Eagles bettors have lots of choices when deciding how to wager on the team this year, with more options than ever.

The Eagles won their first Super Bowl in 2018 after going 13-3 earning the No. 1 seed in the playoffs. Since then, the Eagles have been riddled by an aging roster, injuries and a 1-2 postseason record.

(Bets are action if season shortened, void if season canceled or there are not seven playoff teams per conference.)

Team to finish with best record overall in regular season

(All teams must play 16 games for action.)

Team to score the most points

Team to score the fewest points

Team to concede most points

Team to record most sacks

Team to record most interceptions

For more on Eagles betting for 2020, check out this preview from TheLines and PlayPicks: 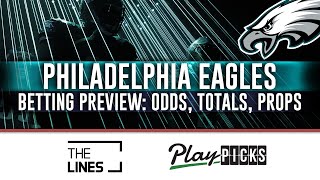