Before they saw their name on a marquee, some Hollywood stars changed their names. But what happens when a Pennsylvania casino decides to switch?

The horse racing track at The Meadows opened in 1963. It wasn’t until 2007 that a temporary casino opened and a permanent casino followed in 2009.

In mid-October 2021, The Meadows was officially renamed Hollywood Casino at the Meadows.

“The Meadows” name has a long history. What goes into the huge decision of a casino changing its name? How did Penn National, which owns and operates The Meadows, pull off the rebrand so far? What are customers’ reactions? PlayPennsylvania asked a communications strategist for his thoughts.

Hollywood Casino at The Meadows

Brian Hart is a communications strategist and founder and president of Flackable, a Philadelphia based national public relations agency.

Yes, it’s a rebrand, Hart said, but they are keeping the familiar Meadows name.

“I think it was smart to keep The Meadows name,” said Hart. “They are doing it the right way. Penn National has a reputation for acquiring casinos and bringing in their flagship Hollywood Casino brand. If you look at how they structured the logo and rebranded it – they are merging the two together.

“From a local perspective and the history behind the name, you lose a little bit of local branding. What you are getting in return is the national Hollywood casino brand. They are not totally ditching The Meadows…even the logo looks the same.” 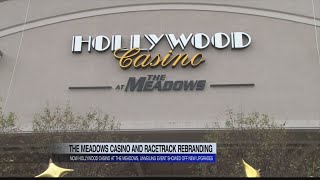 Rebranding The Meadows to Hollywood Casino

The two-year process of rebranding the Washington County casino culminated during a weekend of festivities at the casino and racetrack.

“We want to make sure that this property is the entertainment destination for western Pennsylvania for a long time, so we’ve invested over $25 million back into this facility with new amenities.”

New amenities at Hollywood Casino at The Meadows include:

“They did a good job at getting the word out about the rebrand. It was kind of a layup for them. If you put it (a casino name change) in front of the media, it’s going to get covered. But the timing, messaging and prompt transitions of the web properties were really well done.”

The “Hollywood Casino” brand across PA

The PA flagship for Penn National is Hollywood Casino at Penn National Race Course in Grantville. They recently unveiled renderings of a new Barstool Sportsbook that is scheduled to open soon.

Hollywood Casino York opened in August. The mini-casino is home to the first Barstool Sportsbook on the east coast.

Another mini-casino, Hollywood Casino Morgantown, is scheduled to open by the end of 2021. And yes, it will have a Barstool Sportsbook.

How have customers reacted to the news of The Meadows switching its name? Of course, there have been numerous posts about it on The Meadows social media pages. Recently, The Meadows asked customers to share their favorite memories. Some comments were:

“I don’t see any advantage in getting into the comments,” said Hart. “It’s expected. They had to know they were going to get comments. The way they rebranded it, if people want to call it The Meadows, that’s fine because it’s still a part of the brand. A rebrand like this doesn’t just happen overnight.”

The Meadows isn’t the first Pennsylvania casino to rebrand.