Santa came early for six players in Pittsburgh. Over the weekend, Rivers reported that a table of poker players hit the bad beat jackpot worth $431,648.

The hit happened at Rivers Casino Pittsburgh on Fri. Dec 3 when two players got all their chips in on a mega pot. Player 1 had Quad 7’s and lost to Player 2 who had a straight flush to the 8. Player 1 was the “loser” of the hand and scored a payday of $172,662 (before taxes). The rest of the money was split amongst the table. The full breakdown is as follows:

How rare is a bad beat jackpot?

The money won from these payouts can be life-changing for many people.

“Incidentally winning a bad beat jackpot on 888.com back in 2008 actually launched my movie directing career,” Movie Director and Film Producer Mario Cerrito told PlayPennsylvania. “I won $90,000 and was able to use this money to launch my first film project.”

How a bad beat jackpot works

Casinos may have different rules in place but usually a player needs to lose with Quads or better. The jackpot usually updates daily at the poker room and will be displayed on monitors throughout the room. Players can also use tools like the Bravo App to check the latest Bad Beat Prize amount.

Additional details to activate the bad beat generally include:

The guys over at Nerdthusiast Poker also did a video explaining how a bad beat works and shared some stories of hitting jackpots in the poker room. 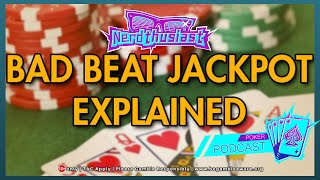 Casinos promote events like tournaments, high hand bonuses, and bad beat jackpots as a way to entice players to visit their room. Pennsylvania casinos are offering promos and bigger tournaments as more players come out to play live.

Currently, Rivers Philadelphia and Live! Casino Philadelphia are hosting $100,000 guaranteed tournaments each month. For more on getting into the action, see our rundown on the best live tournaments in PA and NJ for December. And of course, online poker in PA is always an option for those who choose to stay in and play on the virtual felt.