The wait is over.

The same goes for the bickering, and maybe some of the anxiety too. Baseball is definitely back.

The months of player/owner squabbling, the questions about whether the season would really happen — all of those are gone. At least for now.

So let’s celebrate the nation’s pastime — and our Philadelphia Phillies and Pittsburgh Pirates — being back on the field, back on the television and back in our lives. Soak it in. And if you’re so inclined, make a few wagers.

Pennsylvania sportsbooks are making it tempting with a whole bunch of promotions tied to baseball’s return.

Let’s take a quick look at some baseball bets, promos and storylines to get you ready for the season.

Philadelphia pitcher Aaron Nola, a dark horse NL Cy Young contender (22-1), is expected to take the mound in the Phillies’ season opener Friday against the Miami Marlins. Sandy Alcantra should start for the Marlins, who are +170 at BetRivers, PlaySugarHouse and DraftKings Sportsbook.

FOX Bet and other sportsbooks have the Phillies favored at -200. There are 39 wagers total available at BetRivers/PlaySugarHouse for the game, with the over/under set at 8.5. The first pitch is scheduled for 7:05 p.m.

And there may not be fans in attendance at Philadelphia’s Citizens Bank Park, but that doesn’t mean the seats will be empty. According to the Philadelphia Inquirer, the Phillies will honor health care workers with cardboard cutouts near home plate of doctors, nurses and staff from local hospitals. Regular fans can also purchase a cardboard cutout of themselves that will appear in the stadium. All proceeds will go to Phillies Charities.

Phillies fans can find a number of futures bets involving their favorite team. Odds are available on Philadelphia winning the National League (11-1) and the World Series (25-1), along with several other wagers focused on individual players.

For more on Phillies futures betting, check out this PlayPicks video from our friends at TheLines. 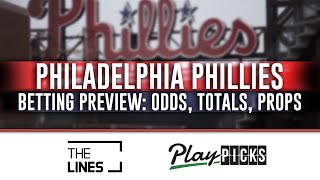 The Pirates (+170) will send Joe Musgrove to the mound for the team’s first game in St. Louis at 8:16 p.m. The Cardinals, who are -200 at BetRivers/PlaySugarHouse, will counter with Jack Flaherty. The game’s over/under is 7.5 runs.

After a three-game series with the Cardinals, the Pirates will return to Pittsburgh on Monday for their home opener against the Brewers.

And in other news, the Toronto Blue Jays, who hoped to play their home games in Pittsburgh after not receiving approval to play in Canada, ran into a roadblock there as well. As noted by CBS Sports, the Pennsylvania Department of Health and the PA state government nixed Toronto’s plans to play in PNC Park.

So for better or worse, Pittsburgh fans will just have their Pirates. If fans are bold enough, a futures bet on the Buccos to win the National League (80-1) or the World Series (100-1) would bring a big return.

Whether you’re betting on the Phillies, Pirates or an out-of-state team, Pennsylvania’s sportsbooks are planning to make it worth your while.

A number of MLB promotions are available across the region’s sportsbooks to enhance your bets and even safeguard against some of your losses. Be sure to see our PlayPennsylvania rundown of MLB promos to help you take advantage of all the incentives.

Data from FanDuel on Thursday showed some insight into where early betting dollars are going for MLB. In the World Series winner market:

Daily fantasy players will be getting some perks from baseball’s return. For starters, DraftKings is offering a $3, three-entry max contest that has a prize pool of $300K and is completely risk-free. Each entry in the contest will get at least a $3 return via a refund if your lineup doesn’t cross the cash line.  And the first-place winner still receives a healthy $20,000 payout.

If you’re chasing bigger profits, DraftKings’ featured contest is the $10 entry Million Dollar Swing, which has a million-dollar prize pool and a first-place payout of $250K. Second place earns $100,000, and third receives $40,000.

Over at FanDuel, the $3 Return Rally is paying out a million dollars to first place. The second-place prize is $100K, and third place earns $50,000.

Both sites have contests available at all price points to give you several avenues into the action.

Baseball and betting have rallied: keep rooting for them

It’s hard to believe, but baseball is back.

New York and Washington opened the season last night with a 4-1 Yankees win that arrived when excessive rains ended the game after just six innings. Perhaps it was a perfect metaphor for the season ahead.

The season is short. Nothing will be perfect. And it may get messy.

But baseball has made its return.

The wait is over. Soak it in.