It took a while, but Parx Casino owner, Greenwood Gaming announced its partnership deal with gaming technology provider Kambi.

The two have entered into a multi-year agreement. Kambi will provide its sports betting platform, managed services and “best-in-class land-based wagering experience,” to Parx Casino.

The relationship was first rumored months ago.

Greenwood Gaming’s license application presentations to the Pennsylvania Gaming Control Board (PGCB) then made the possibility explicit. Finally, the two companies made it official on Nov. 13.

According to the press release, the deal “followed a thorough selection process, with Kambi’s unblemished record of regulatory compliance and corporate probity key to securing the deal.”

“We are excited to be working with an experienced, successful sportsbook partner that can bring best-in-class systems and odds making to the Parx-branded sports betting products.

We are confident in their systems to provide timely, secure and accurate wagering opportunities across many sports both pre-game and in-game.”

The press release states that the Parx Casino sportsbook is on track to launch before the end of this year.

A second Kambi-powered sportsbook will go live at the South Philadelphia Turf Club.

There was some debate about timing at the PGCB meeting that approved the application.

The Turf Club operation will only go live after a satisfactory rollout at the Parx Casino. The Office of Enforcement Council (OEC) wants to confirm all is well at Parx before authorizing launch at the Turf Club.

Kambi will also provide online sports betting, although this will not be available until 2019.

Now that the deal is signed, Kambi will work to integrate its technology with the account management system provided to Parx by GAN. Only after that is done can everything go live.

The big surprise in the deal was that the contract covers a possible move into the New Jersey market.

The company statement implies this is an option but that there is no official decision yet. The text only says that the deal covers “a potential sports betting operation in the neighboring state of New Jersey.”

There are 12 casinos active in the New Jersey market and Greenwood Gaming doesn’t own any of them.

But it does own an off-track wagering location “Favorites At Vineland.” The facility is associated with the Atlantic City Race Course, which is also owned by Greenwood Gaming.

Adding sports betting would be technically simple for Kambi, but whether Greenwood could get regulatory approval is another question.

There is also some history between Parx and New Jersey. Way back in 1998, Greenwood tried a joint venture in New Jersey in partnership with Penn National Gaming.

The partnership went by the name of Pennwood. The group bought the Freehold Raceway in Freehold Borough, New Jersey. The joint venture also purchased an operating lease for the Garden State Park in Cherry Hill, New Jersey.

While the venture was not a success, it does mean that Greenwood has some corporate experience of New Jersey and perhaps some unfulfilled ambitions.

The New Jersey market is now so crowded that new market entrants will find it difficult to establish market share.

However, if Greenwood is up for the fight, Kambi will now happily back them all the way.

Kambi is already partnered with the Rivers Casino and the Sugarhouse Casino in Pennsylvania. The deal with Greenwood means that Kambi has secured over a quarter of the Pennsylvania market. It also works with both DraftKings Sportsbook and 888 Sport in New Jersey, along with PlaySugarHouse NJ.

“Greenwood Gaming represents yet another exciting partnership for Kambi, as we continue to establish ourselves as the premier choice for operators looking to enter the U.S. sports wagering market with a quality product and trusted partner.

“Greenwood Gaming is committed to delivering exciting gaming experiences to players in a safe and responsible fashion, therefore, when deciding to launch a sportsbook, Kambi quickly became the natural choice and I’m confident we will form a successful partnership.”

Max Bichsel, who runs US operations for Kambi, spoke with Legal Sports Report about the company’s plans stateside: 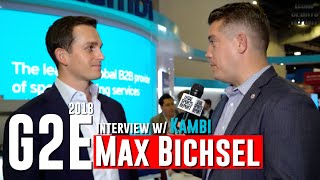