A movie makeover is a common theme in romantic comedies. Before the ugly duckling gets its happy ending it must first have a makeover montage with a shopping spree, visit to the salon, then the big reveal of the sleek, new swan.

At the site of a former Sears at the York Galleria Mall, the finishing touches are being applied to Hollywood Casino York showing that makeovers aren’t just for the big screen. The $120 million mini-casino opens to the public at noon on August 12.

“We are really proud of this project and it has been very creatively done. Taking a space that has had no life for quite some time and putting such a significant investment in this community and making it a destination has been exciting.”

Yes, you can use cash at Hollywood Casino York.

How to go cashless at Hollywood Casino York:

Is there alcohol service?

Does Hollywood Casino York have a poker room?

What are the table minimums?

“Stoolies” should feel right at home with familiar Barstool phrases like “life life too short to bet the under” displayed at the teller window and “lots of game left” splayed under the 9-foot tall and 32-foot wide video wall.

In addition to Barstool branded touches, the walls of the sportsbook are made with reclaimed basketball courts. The floor  is styled like a football field.

“When we announced Barstool in Jan. 2020 as a key partner it gave us the opportunity to think about how we would design a sportsbook now that we have one of the preeminent sports brands,” said Chamberlin. “This is a very different sportsbook from anything in the Commonwealth that I’ve seen. The feeling is very approachable and fun. If you are a sports bettor, you are going to love it. It’s also going to be a great place for people to enjoy the game and the camaraderie that goes with watching the game.”

Mini-casinos were a part of the Pennsylvania 2017 gambling expansion legislation. In Jan. 2018, Penn National bid a whopping $50.1 million for the right to build a mini-casino.

It’s not just a defensive move.

Chamberlin pointed out the proximity to Maryland in bringing in players from out-of-state.

“Companies like Penn National have been very good community partners. They have alleviated that idea that casinos were going to create more problems than success. They are highly regulated and casinos in Pennsylvania operate in a safe and fair manner.”

Thanks to an aggressive recruiting effort which included a hiring center at the York Galleria, free dealer school, seven hiring events, a $1,500 sign-on bonus, and a drawing for a Harley Davidson, they exceeded their initial projections for 200 employees and currently have 290.

“We wanted to make sure we hired local and approached it very aggressively,” said Warren. “We knew we had to go out into the community to talk about our product and what it’s like working here.”

Hollywood Casino York is possibly already eyeing expansion. PlayPennsylvania reported in June that PNG talked about leasing the empty second-floor space. The casino has an entryway with an escalator which leads to the casino on the ground floor. 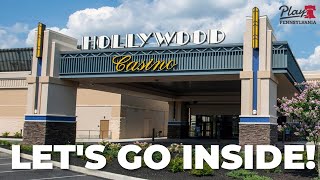 Lead photo and all photos by Katie Kohler.