Rain or shine, there are two Mega Millions drawings that occur on Tuesdays and Fridays after 11 p.m. EST. Tonight’s winning numbers are available below after the drawing. 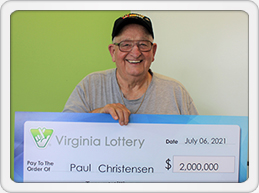 VA excitedly claimed his prize. In fact, Christensen bought his Quick Pick and matched all five of the numbers, narrowly missing the Mega Ball.

Typically, the prize is worth $1 million for picking a Match 5. However, Christensen tacked on the $1 optional Megaplier. Thus, the extra $1 investment doubled the win to $2 million. His ticket was purchased at the BP-Shorts Food Mart in Unionville, VA.

Waver stated, “I like to play a variety of Lottery games, so I purchased a few tickets when I was getting groceries. About a week later, I checked the tickets. When I realized I’d won $1 million I was blown away!” She plans on paying off student debt to pay it forward.

Here in Pennsylvania, you can buy Mega Millions through the state-run PA online lottery. Moreover, there is a free sign-up bonus of $5 plus a first-deposit match bonus. Additionally, there are lots of free and fun ongoing promotions.

Finally, there are other states that offer online lottery sales: